Michael Taylor lives and paints in Dorset. After winning the first Holburne Portrait Prize in 2002, he chose to paint Andy Sheppard, one of Britain's leading saxophonists. The composition was based around the confined space of the musician's studio in Clifton, Bristol. It gives the impression of a weary musician hemmed in by his work and his instrument, yet inspired by the music that surrounds him.

Michael Taylor lives in Dorset, where he paints interiors, still-lives, figure-studies and commissioned portraits. His arresting double portrait of a Couple with Lamp (Alice and Clive) was the winner of the Holburne Portrait Prize in 2002. The purpose of the competition was to demonstrate that, over 200 years after Gainsborough and his contemporaries, portrait painting is still flourishing in Bath and the south west.

This portrait was commissioned by the museum as a result of the competition. A unique feature of the prize is that the artist may paint any person he chooses, and the Holburne suggested approaching someone who had made a significant contribution to the cultural life of the area around Bath. Michael Taylor chose Clifton-based saxophonist Andy Sheppard, as someone whose work he and his family have always enjoyed.

Michael Taylor writes:
I favour creative people as subjects, and there is something interesting about people who are creative in non-visual media. The studio is a very confined space, but Andy was very easy to work with. The pose came unusually quick. He sat down with the tenor sax on his knee and asked how I wanted him to pose, and I took one look and said ‘like that’. During the sittings, we had a mixture of music on. Some of it was his, some just music relevant to passing conversation: Messiaen, Miles Davis ….

Andy Sheppard is one of Britain’s leading tenor saxophonists. Much in demand as a composer as well as performer, he has written music for dance, theatre, TV and local festivals. He has toured and recorded in many parts of the world.

Commissioned by the Holburne Museum of Art, 2003 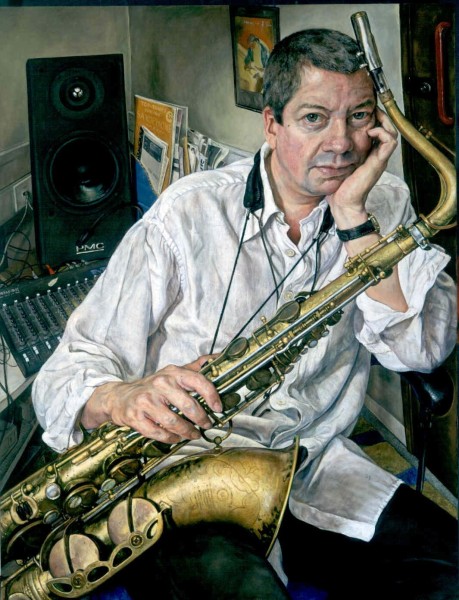